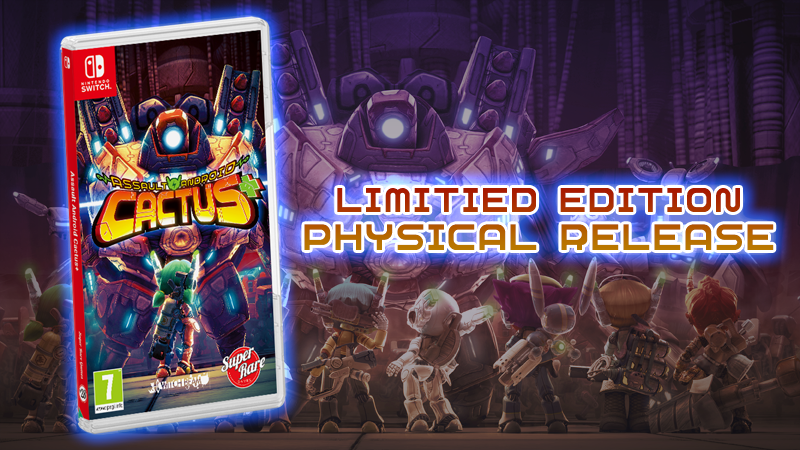 We were already proud of the game we released on Nintendo Switch, with Assault Android Cactus+ achieving an 86 Metacritic rating making it the 11th highest ranked Nintendo Switch title of 2019 and have been touched by responses we’ve had from players. 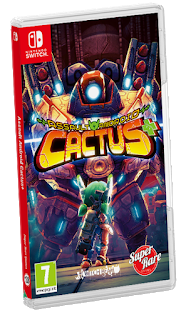 And now we’re excited to announce that thanks to Super Rare Games, there will be a limited physical release of Assault Android Cactus+ happening later this month!
This is going to be your one and only chance to get Assault Android Cactus+ as a physical boxed Nintendo Switch game including a pretty snazzy all new colour manual. Each physical copy also includes three randomly selected trading cards from the five card set.

This is your chance not only to obtain a boxed copy of Assault Android Cactus+ on Nintendo Switch but to introduce Cactus’s frenetic action shooting to a friend or family member under the guise of appropriated mainstream legitimacy. Just rock up at their house, drop this bad boy on them and then act in surprise that you happen to have a Pro Controller hanging out your back pocket just in case they want to play some co-op right now no seriously just pause whatever you’ve got running we can play this for a bit it’s good okay? go with the red haired one her gun has homing, no it’s fine we’re on the same team just look at the screen, yes your eyes get used to it after a bit, no this is the first level.

Anyway, this is all very exciting and we hope you look forwards to March 12th when preorders open exclusively at SuperRareGames.com